The core component on your heating system is the boiler. When you renew the boiler the manufacturers require that the system is thoroughly cleaned, best industry practice is considered to be to power flush the system.

Power flushing is the fastest and most effective way to flush heating systems, and involves minimal disruption and dismantling. The power flushing pump is temporarily connected into the heating system during the flushing process. The high water velocity, combined with instantaneous flow reversal, dislodges and mobilises sludge and corrosion deposits. 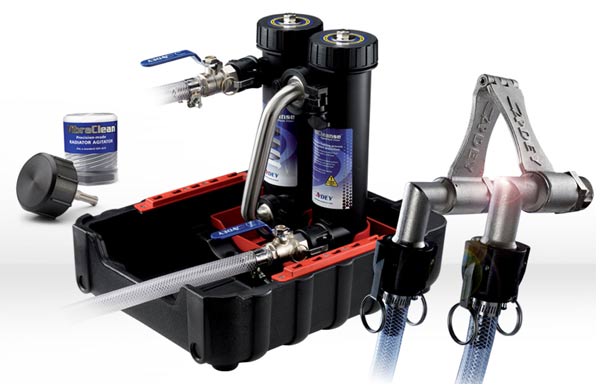 Having loosened the debris, the pump expels it from the system to waste, using a high velocity flow of fresh water. Radiators are individually flushed without removal or disconnection from the system. After the power flush, the system is full of clean water, and re-instatement to normal operation only takes a few minutes

A power flush can be extremely effective in cleansing systems that have corrosion problems as a result of a design fault, but we strongly recommend that any such faults are rectified before power flushing commences.

The success of a power flush will depend on the level of heating system corrosion which has occurred beforehand. The process will cure most circulation problems, but cannot undo the corrosion and gradual decay that has led to the need to power flush the system.

If corrosion is at an advanced stage then it is possible that leaks may occur even without power flushing. We believe that it is better that is occurs whilst we are present to remedy the problem, rather than for it to arise over a weekend or whilst the house is unoccupied.

Systems which have been negleted over a period of time, or have not been treated with an effective corrosion inhibitor, may have severely compacted corrosion debris, in pipework, radiators, or boiler, and it is possible that even after the power flush, some radiators may still not be fully effective. Boilers on the margin of failure may cease working due to sludge and debris later breaking loose and collecting in the heat exchanger.

Please contact us for further details and to request an on-site visit.